Maddox was eating a boiled egg and I was eating a fried egg. He kept asking for my egg because he didn't have any. 😑
I told him he had egg and he said, "not white egg" because he only had yolk left.

Maddox is recently potty trained now and he has learned how to stopping peeing then start again. He said, "I turned it on and off!"

Seeing an airplane taxing after landing, "He's going back to his cage."

When he saw Matt in running shorts, "Why you wearing short sleeved pants?"

Maddox shared a pretzel with me and I told him thank you. He said "I'm being nice." 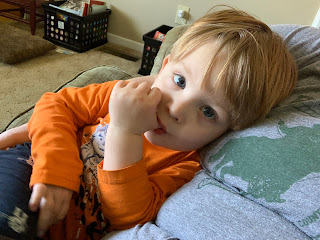 While on a recent visit to CiCi's "Hi! Welcome to CiCi's!!"

On that same outing, I told Maddox to eat his pasta and he said, "and pizza because I'm hangry!"

One morning Maddox asked for the orange plate and I had already told him he could have it. I said "what did I say, buddy?" and he said "be patient." 😊 Guess he's heard me say that a few times!

While at the park, a little girl walked up to Maddox and asks to get on this horse. He points to the other identical one that was open. She said no and he said, very calmly, "Well, I'm riding this one." 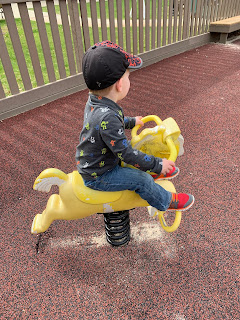 Matt got everything set up to paint since Maddox had asked to do . Then he said "I don't want to paint." 😂😑

This isn't something Maddox said but rather something very sweet. Matt and the boys were at Chick-Fil-A and a friend came in. When they walked in, she said, "there is my best friend." and pointed to Maddox. ❤️

I told Maddox to get all the way in his chair at the table and he said very politely, "I'm getting to it."

Posted by Leslie at 6:00 AM
Email ThisBlogThis!Share to TwitterShare to FacebookShare to Pinterest
Labels: Maddox, Maddox Does, Maddox Says