Hey Guys! I realized recently that I had blogged about the beginning of Lela's journey but that I had not updated since then. To read the first part of her story click here.  My second post was here.

Here is the current update. :)

Lela had surgery at St. Jude on April 20th. They removed her left eye which was almost completely "full" of a tumor and really showed no likely signs of vision. When the doctor removed the tumor, he came out to speak to Jeff and Mandy and told them that the tumor had already begun to bleed and even if they had opted for chemo and radiation, she would have still had to have the eye removed anyway. Praise God for giving Jeff and Mandy confirmation that their very difficult decision was the right one. The eye was sent to pathology for a check and she and her parents were able to go home that weekend.

On April 25th, they received results from the pathology that the cancer had not spread to the other eye and that the brain was clear as well. At that point, they knew that they would need to return to St. Jude every four weeks for the next six months for repeat scans to ensure that no cancer is present. After 6 months, the exams will be less frequent.

On May 16th, she had her first repeat scans and they were all clear.

They went back in June to have follow up scans and then Lela had her permanent prosthetic eye placed. I know I won't do it justice to explain it BUT the eye they placed is permanent and will eventually move when her muscles attach to it. The front of her prosthetic eye is like a contact lens that has been painted for her to match her other eye. Jeff and Mandy can clean it and it really looks amazing. This portion can be changed as much as needed to keep up with her as she grows.

We went to see them last weekend and Matt took Lela's 4 month old pictures and she is adorable! Here are two of my favorites! 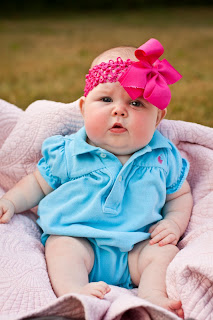 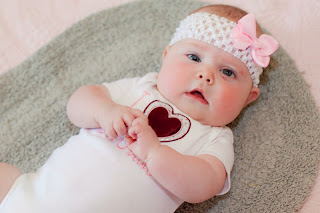 Til then-
Did YOU Hear about the Morgans?

Posted by Leslie at 6:08 PM
Email ThisBlogThis!Share to TwitterShare to FacebookShare to Pinterest