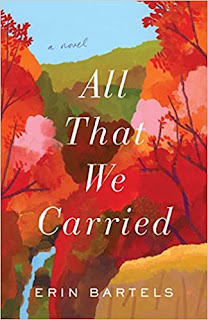 **I received this book from Revell. This is my honest review.**

Ughhhhh, I really really really wanted to like this book. I enjoyed Bartels last book The Words Between Us but All That We Carried fell way flat for me.

Let me start by saying, I didn't fully loathe the book. I really enjoyed the storyline of the sisters, Olivia and Melanie. They had been estranged for 10 years following the tragic death of their parents in a car accident and Melanie asked Olivia to go on a week-long hiking trip in an effort to bring them back together.

I enjoyed seeing how they learned about each other, understood each other's feelings, etc. That part was good.

Then there was the weird "Christian" aspect of the book. It was just completely odd for me. There was a character in the book, Josh, who was just hard to figure out and I just didn't like that part of the book AT ALL!

I will definitely give Bartels another chance should she write another book because I do enjoy her story telling, in general, but this one was a miss for me.

Posted by Leslie at 8:56 AM No comments:
Email ThisBlogThis!Share to TwitterShare to FacebookShare to Pinterest
Labels: book, book review, book reviews, books

1. Star Wars Jedi Search
2. Celebration of Discipline by Richard Foster
3. The Founding Myth by Andrew Seidel
4. How To By Randall Monroe
5. The End is Always Near by Dan Carlin
6. I will Carry You by Angie Smith
7. Peter Pan by James Matthew Barrie (to boys)
8. The Hobbit by J.R.R. Tolkien (to boys)
9. The Battle of Nashville by Benson Bobrick
10. Mortal Engines by Philip Reeve
11. A Solider of Great War by Mark Helprin
12. Chronicles of the Black Company by Glen Cook
13. The Tech-Wise Family by Andy Crouch
14. Eric by Terry Pratchett
15. Who was Abigail Adams? by True Kelley
16. 1177 BC: The Year Civilization Collapsed by Eric Kline
17. 11 Indispensable Relationships by Leonard Sweet
18. Off Armageddon Reef by David Weber
19. Adventuring Together by Greta Eskridge
20. The Volcano of Fire By Geronimo Stilton (to the boys)
21. The Kingdom of Fantasy by Geronimo Stilton (to the boys)
22. Lunch Lady and the Cyborg Substitute by Jarrett J Krosoczka (to the boys)
23. Lunch Lady and the League of Librarians by Jarrett J Krosoczka
24. The Tower of Treasure by Franklin W. Dixon
25. The Last Wish by Andrzej Sapkowski

Posted by Leslie at 6:00 AM No comments:
Email ThisBlogThis!Share to TwitterShare to FacebookShare to Pinterest
Labels: book, books, books Matt Read