I had hoped to write this post soon after Mason was born but as you know if you have children, life gets busy and time passes quickly. So, I'll do my best to remember everything I can.

November 1st, 2nd, and 3rd were spend in the hospital. Most of the time was unremarkable except Mason began to have difficulty nursing/latching. In the hospital, I began pumping and we began supplementing formula. Mason met Granddad on November 2nd and he loved him. :) Mason was circumcised as well. We had some great nurses while in the hospital and we were discharged home on November 3rd.

GiGi was able to stay at our house with us until November 18th. We certainly miss her being around and her help during the first 2 1/2 weeks. 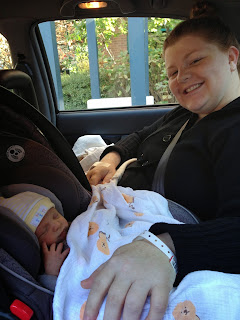 When we got home, we gave Mason a pacifier. I had gone back and forth about whether or not I would give a pacifier. In the end, we decided to give it to him.


On November 4th, we noticed that Mason was a little more fussy than he had been and he had not had a bowel movement since the hospital. We called the doctor and Matt and GiGi took him in. Turns out he had lost a pound since birth and he was not getting enough milk even though we had been following the hospital nurse's guidelines. The doctor gave us new guidelines for what to feed him. 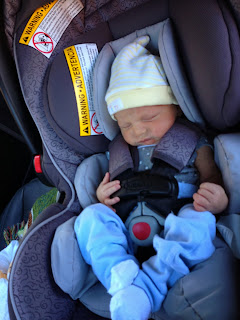 On November 5th, we went back to the doctor for a re-check of his weight and he had already gained 7 ounces. We were glad we were on the right track and that Mason seemed to be much much happier.

Over the first 10 days, we tried really hard to get Mason to latch during breastfeeding. He was easily frustrated and it was hard on him, me and Matt. We eventually decided after lots of discussion and prayer that I will pump and we will feed him by a bottle and supplement with formula as needed. It is not what we had planned but it is working well and we all have a peace about the situation. 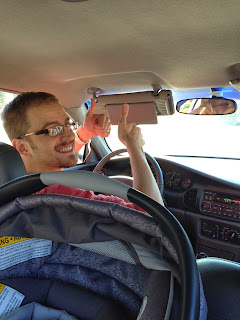 All of the other days were very similar to each other: eat, sleep, poop, nap for Mommy, etc etc etc :)

Mason is basically on a 3 hour schedule pretty consistently. There are times when he is hungry early and we work around that but for the most part, he is eating on that schedule.

On November 13th, the girls from my small group came by to meet him. Unfortunately, I didn't get a picture! They brought us dinner and dessert and we enjoyed  visit with them. Mason charmed them too!

On November 14th, we had his 2 week well visit appointment. He weighed in at 8 pounds, 4 ounces, measured 20.5 inches and his head was 14.5 inches. Our little guy is growing like a weed and we can see it in his cheeks and newly found double chin! 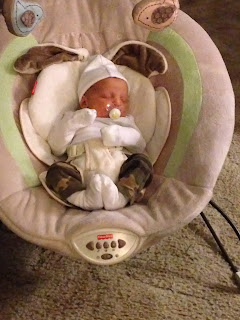 Mom and Dad went on a date to the grocery store one evening and also to run errands another day. We are wild and free! :)

Mason is sleeping well in the night and going down easily after each night time feeding. During the day, he is still very interested in lots of attention when it's nap time and he isn't quite ready to just fall asleep in his crib. :)

We are enjoying our little guy so much. We are enjoying snuggling with him and enjoying just looking at him when we can. We definitely got ourselves a sweet, handsome little boy.

**I'm sure I forgot MANY MANY MANY details but this is what I can remember. :)
Posted by Leslie at 6:00 AM
Email ThisBlogThis!Share to TwitterShare to FacebookShare to Pinterest