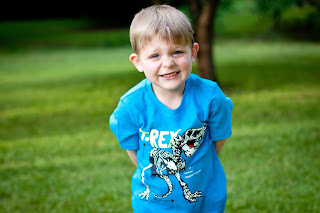 We saw a rainbow one afternoon. Mason said, "Did Jesus sent that? We told him that he did and asked him why God sends rainbows. "So we know he won't flood the earth again." 😭

At the park, Masons stood at the top of a structure and re-enacted the scene from Lion King. Yep, he's awesome!

Mason is in quite a hurry to turn 5. The time is fast approaching and now he doesn't say he can do certain things because he's strong or whatever. Most often, it is "because I'm almost 5."

Matt texted one day when he had the boys at CFA play place and said the following:
"Mason is like the play place rules man. Two new boys came in. 'You need to take your shoes off but leave on your socks. These boots are our packages that we are taking to South America. Let's play!' Love it!

We got a book from the library that teaches you how to draw various dinosaurs. I drew one while Mason was resting and asked Matt to tell me Mason's reaction of my t-rex. Mason's response: It's a really nice iguanodon" 😑

Mason asked if I had a mom. He know's who she is and what her name is but I played along. He named 10 different people and then I said, "Silly, it's GiGi." He said "No. GiGi is a superhero! Her superpower is that she is FAST!" 😂

While out playing in the pool in the yard, he was running a soup and lemonade stand. 😍

"Now that Maddox can say my name correctly, I will definitely hand him magazines!" This is said in response to suddenly handing Maddox magazines in the car while we are driving.

Mason was watching muffins bake and he said, "The Muffins are bubbling up! Bubbling up with happiness!" 😂

Mason came out of his room during rest time and I asked what he needed. "I just came out to get my water for I to stay hydrated."

On the day we went to get GiGi from the airport for her visit, Mason said, "I wish I was GiGi's son because I wish I could fly on an airplane."  Guess that would do it? 😏

When Mason caught a caterpillar one afternoon, he said, "I'm about to cry because it's so cute!"

"Mom, I took a sip of water and then I spit it on the grass to help the grass grow." Well, there ya go!