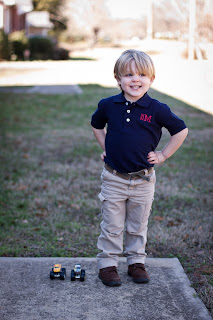 Mason now says "Why again?" if we answer one of his "whys" and he isn't satisfied. :)

When it's time for a meal, we always ask Mason if he wants water or milk. He thinks it is HILARIOUS to say "water and milk" and laughs hysterically.

Mason goes running by when Matt is changing Maddox and says "I have to potty!!!" comes out after with pants around his ankles and says "I pooped and wiped myself!" **cue fear from all parental parties!!**

"Mason, do you think we should have another baby one day?"
"Uh huh. Three more babies. 2 girl babies yike you and one boy baby."

I asked Mason to sit up in his chair and he said, "Ma, I sitting applesauce (criss cross applesauce). I asked him who taught him. He said, "My teacher!" Not just learning about Jesus at church but also about proper sitting. :)

Mason now has some invisible puppy dogs and I was asked to watch them during nap time. :)

I asked Mason what he needed from the grocery store: peanut butter and jelly, eggs, and Anna...haha! Guess he wanted to play with his bud.

I was dancing in the kitchen one day and I said, "I'm crazy!" And Mason said "You not crazy. Dad's crazy!" haha!!

Mason was asking me about his belly and why he has one. He wouldn't take my answer so I asked him, "Why do you have a belly?"
"Cause I a boy!" :)

During our school this past week, Mason showed me that he knows 3/5 letters in his name. YAY!

Mason and I have been watching the mama giraffe on youtube waiting for her to deliver the baby and Mason called her "Sophie" like our toy giraffe.

We heard the newest Justin Timberlake's song came on during a dance party and Mason said, "That's my jam!" !!!

Maddox has been very interested in the bathroom lately and he tried to go in one morning and Mason said, "No Ma-mix. Dis not for babies. It's for big guys and adults!"

Posted by Leslie at 6:00 AM
Email ThisBlogThis!Share to TwitterShare to FacebookShare to Pinterest
Labels: Mason Does, Mason Says

Wife to Matt; Mom to Mason and Maddox; PRN Speech-Language Pathologist; Loves to read, cook, blog and be with my guys.

The oldest son of the Morgan Family; Born on 11/1/13; Already a wild and free personality; Joyful always; Brings so much laughter to our lives. Loves to learn, be outside and spend time with family.