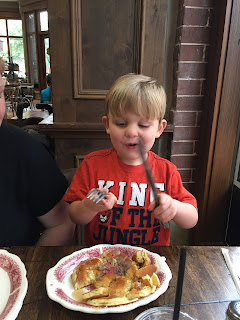 Mason hasn't been the biggest fan of showers but one day recently, he took one without any problem. So proud!

He told me he wanted to make a lemonade stand with Anna. :)

When walking to speech one day, he was moving slowly. "Yeah, I'm walking slowly so I not run out of energy."

Matt was brushing his teeth and Mason said, "Dad, I brush my teeth, too. But not all of them. I need to save some for bedtime." 😂😂😂

He was saying ocean but drug it out "ooooooosssshhhhhh" and Matt and I burst out laughing; surely thought sh*t was coming. Not that he's even heard that word but man, it was funny. 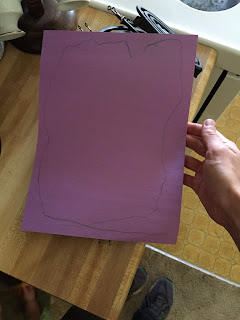 Mason likes to say, "What's that smell?" One day, I told him maybe it was his upper lip. He didn't really react. A few days later we were driving and we smelled something horrible. Mason said, "Hmmm, maybe dat's my upper lip!" 😂😂😂

I told Mason he could take 5 toys on our road trip. He picked 3 cars and two plastic vegetables.

He was afraid Matt was going to leave us at a restaurant while we were in the bathroom. He said, "That's okay. We can take a taxi home."

Maddox was fussing while driving home and he said, "Maddox, we will be home in no time."

He is very into saying he loves people and it's unprompted and not pretentious. He just said one day, "Mom, I love Maddox. I love just love him."

I told him GiGi was coming this week and he said, "Woohoo. I love GiGi. I love her so very much."

Matt took the boys to the park and Mason wanted to wear his fast shoes and he kept showing all of the kids how fast he was in them.